10 Things I Hate About You, Modern Medicine

By Michelle O'Sullivan
Posted November 22, 2017
In Adapting, Adults, Chronic Illness, Management Skills, Mental Health
10 Things I Hate About You, Modern Medicine2017-11-222018-04-29https://www.hypermobilityconnect.com/wp-content/uploads/2018/04/new-logo-hc2017.pngHypermobility Connecthttps://www.hypermobilityconnect.com/wp-content/uploads/2018/04/10-things-i-hate-about-you-fb.jpg200px200px
0
3
The longest relationship of my life, apart from those with my family members, is my relationship with modern medicine. It’s been a fiery one, I can tell you that much. It’s been filled with many, many tears; disappointments; pain; frustration; desperation, a few caring doctors & health professionals, and a lot of medication. 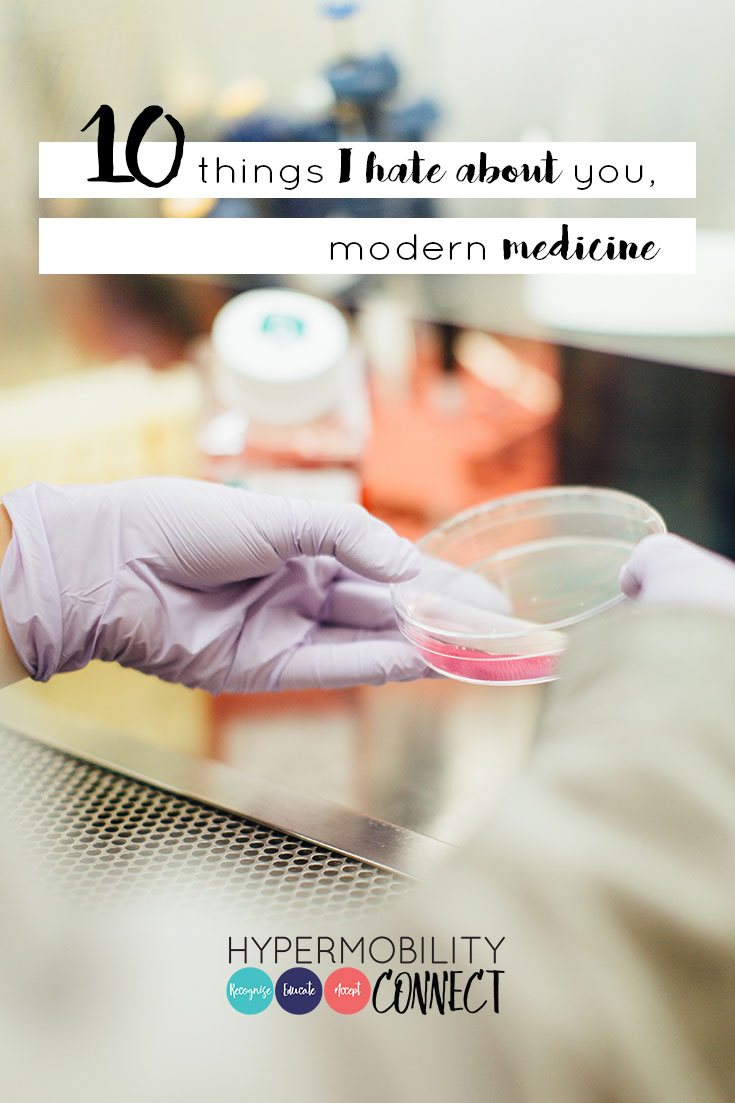 Having been in and out of doctors offices and hospitals from my first months of life, I have been through many phases of being appreciative of medicine…. and of hating all doctors’ with a vengeance. When you’ve been through the revolving door or on that medical merry-go-round for 30+ years, it gets incredibly tiresome.
The novelty of cannulas, IV bags, wristbands, hair nets, hospital gowns, MRI machines, reciting your allergies, name, date of birth…. runs out pretty quickly.  The fact that I could take blood, cannulate or perform an ECG on myself more quickly than your most experienced pathologist is not a trophy I would want to put in ‘the pool room’.
Living life with a chronic condition is hard enough. Looking at your diary for the week ahead and seeing eight medical appointments booked in over five days, just makes me want to curl up in a blanket fort and never leave. It’s weeks like that which remind me of the full-time nature of a chronic condition.
Sometimes I will deliberately schedule myself a week with no appointments!
Woah, ease up Michelle, NONE?
Yep, none. Sometimes I just literally say “bugger it, I’m having a week off”. People get annual leave and holidays from work, so I think I’m equally, if not more, entitled to a week off medical appointments every now and again.
There is only so much prodding, poking, being hooked up to leads, scanning, injecting, measuring and monitoring a girl can handle. There is only so much talking about bowel and bladder movements, food intake, pain levels and medications anyone can take. That goes for talk therapy too.
Notice here that I am saying A BREAK. Not quitting, or stopping. Not becoming non-compliant with therapy regimes or treatments. Just a little mini-break. An opportunity to not feel like a lab rat or a pin cushion, or a guinea-pig.
A chance to be human. Yes, human.
A chance to be reminded that you are NOT your diagnosis or condition.
A chance to recognise that there is a life outside of the medical world…
A chance to be in your own comfortable & safe environment, not inside the walls of a hospital, a clinic, or a doctors office.
A chance to rest.
A chance to recharge.
A chance to see friends or do something enjoyable (oh! novel idea right?)
And, I used to work in the health sector. I used to be one of the people that you would have to go and see. So I understand it from both sides. A break can sometimes be just what is needed to regain momentum, to refuel your hope. It can be the thing that makes you realise that turning up to your appointments IS actually helpful. Sometimes the absence of something can make us understand the benefits.
And sometimes its none of those.
Sometimes it’s purely exercising one’s right to choose. 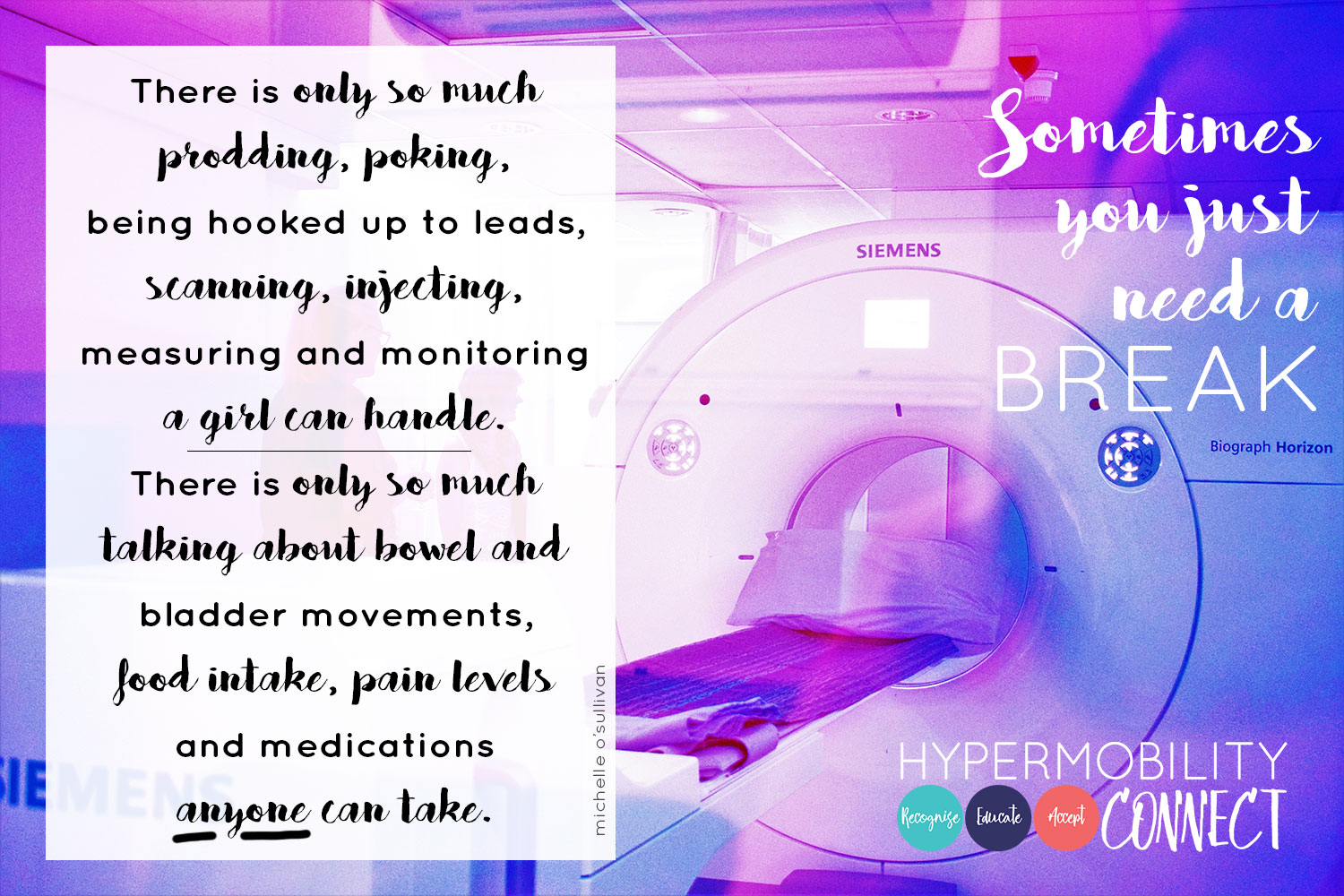 When I say LOVE-HATE relationship, I couldn’t honestly describe it any more accurately.
I love medicine.
I love that we have medicine to help us.
I love that there are new developments in medicine every day in all sorts of places around the world.
I love that we are growing closer to answers and cures for diseases.
I love that treatments for chronic conditions are studied, reviewed, tested and re-tested.
I love those part of medicine.
But I also HATE IT.
1. I hate the imperfectness of medicine.
2. I hate that we don’t know it all yet.
3. I hate that we don’t have the answers or the cures that are desperately needed.
4. I hate that we know SO little about the human body and how it works.
5. I hate even more how little we know about the human brain, and how it functions.
6. I hate that the treatments for some conditions is like throwing your hand into a lucky dip at a primary school fete, and hoping and praying you get a good one this time. And seriously praying it doesn’t get bitten off by something that wasn’t meant to be let out of the zoo/lab yet.
7. I hate that there is so much trial and error. That’s probably the biggest frustration of all for me at the moment.
Example: I had one arrogant doctor say to me “Oh, this medication at X dose will be GREAT for you. You will feel so good on this; you’ll be able to stay on it for at least 10 years”.
Oh, if only he knew
a) I had Hypermobile EDS which means nothing works the way it’s supposed to.
b) I was an O’Sullivan, which means nothing goes to plan, especially in the medical realm.
c) I wasn’t stupid, ignorant or willing to believe his cr*ap and get my hopes up.
d) I knew more about my condition than he did.
After a six week trial of the medication, which did SweetFA, I was taken off said miracle-medication. A medication which is known to cause horrific withdrawal symptoms… of which I had none (until the very last incremental change) – which I am convinced was only because my body was saying, “hold up, where did that poison go?” and clearly because the drug actually did NOTHING, even though the arrogant doctor above told me that couldn’t be true.
I was then put on another medication by another doctor, who is not at all arrogant (far from it), but was hopefully optimistic, only to find that at 10% of the desired dose my heart crapped itself and thought “hmm, maybe we’ll just throw some cardiac electrical issues your way… Just don’t drop dead until we work out why”.
(Side story, I then go to make an appointment with a cardiologist, only to be told I would have to wait three months for an appointment, to which I kid you not, I responded: “I will probably be dead by then”. I don’t think she was sure whether to laugh or not. I didn’t get an earlier appointment. I was just told to wait until February.
Bloody doctors.
Point made? I won’t go into the fact that a medication that is often used to treat people with stomach issues contains lactose, which can be one of the causes of said stomach pain. I just worked that one out the most painful way. Note to self, always read ALL the ingredients.
8. I hate the unpredictability of some aspects of medicine.
9. I hate that medications have warnings about what they call RARE side effects… because they should probably just say: “If you’re special, you’re going to get these… just be armed and ready”. Either that or just write “THE O’SULLIVAN EFFECT = ALL OF THE ABOVE”.
Super frustrating, right? I’m sure you’re nodding your head and thinking “oh Michelle, move over, they are called the “SMITH SIDE EFFECTS” or the “ANDERSON SIDE EFFECTS””. You get it. I get it. Half the world doesn’t, but that’s OK. They’re just not special enough.
10. I hate that even with the medications we have available these days, they are not available to everyone, or if they are, they’re not affordable for everyone.
So.
While I love that we have doctors, I don’t love all doctors.
While we have some good doctors, we also encounter a LOT of bad, ignorant, arrogant and downright insensitive doctors.
While some medications work for some people, they don’t work for all.
While a medication or treatment worked for you two years ago, it won’t necessarily work today.
While some discoveries are being made about rare diseases, it’s not happening fast enough.
While our ability to test for things is getting more precise and more accessible, they’re not precise enough, available enough, or within the financial reach of everyone.
While our ability to identify some classes of medications which might suit people better than others, it’s not yet accurate enough or affordable enough.
I could go on FOREVER, but I won’t. You get my point.
I feel like this post should end like Kat’s quote in the movie “10 things I hate about you”*: “But mostly I hate the way I don’t hate you. Not even close, not even a little bit, not even at all.” But reality is, my love-hate relationship with medicine continues. And maybe it always will. Unless medicine cleans up its act, we will remain in this fiesty love-hate relationship for life, because my problems sure as heck aren’t going anywhere.
*and I just realised that there are some of you who will have no idea what 10 things I hate about you is – it’s an awesome movie, adapted from The Taming of the Shrew…. it’s from the 90’s, staring Julia Stiles. You should watch it!
SaveSave SaveSave 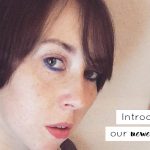 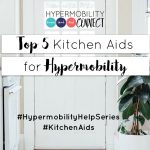