hEDS life: An outsider looking in

When living with hypermobility, it sometimes feels like you are sitting on the sidelines watching life go on around you,  unable to participate.

An outsider looking in.

Feeling more and more distant from your peers as each day passes. 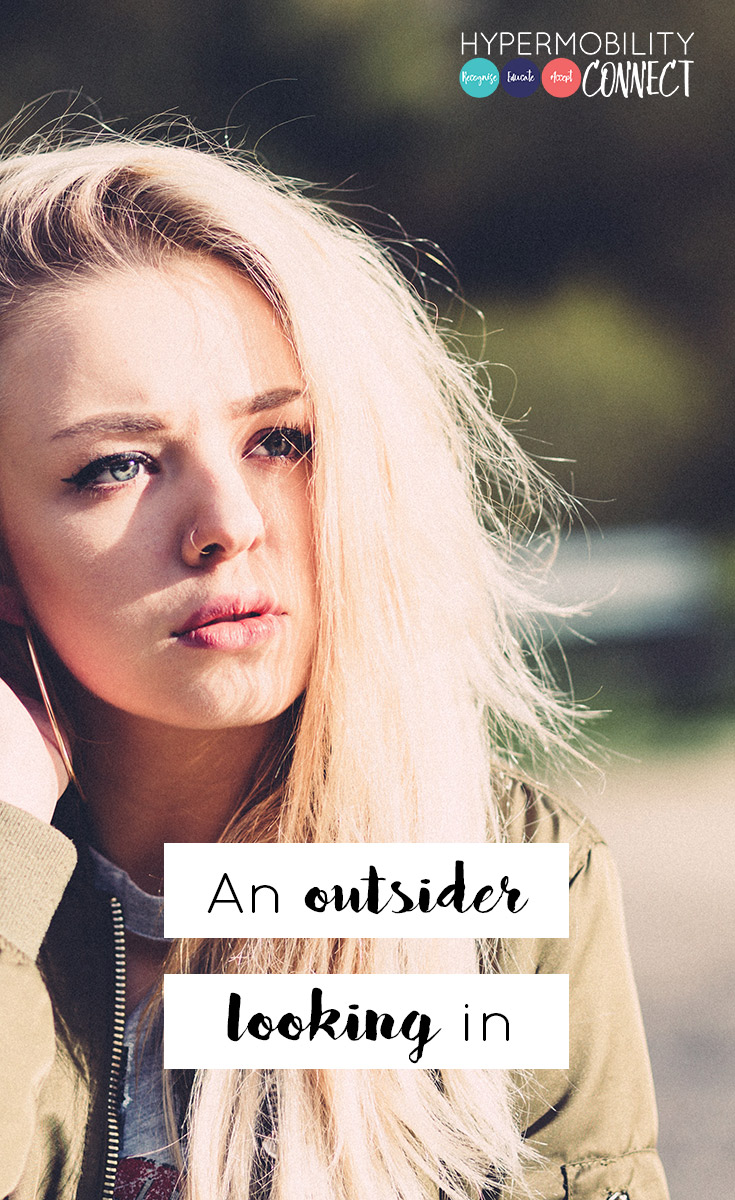 The first time I remember it being like this was in primary school. The memory is quite vivid. I was five years old, sitting on the sidelines during sport with an injured ankle, watching all the other kids play and laugh; desperately wanting to join in; to play; to do what all the other kids were doing. At this point, I didn’t know why I kept getting injured.

Somewhere along the line, people stopped believing I could be injured so often. And I still had no idea why I was always injured or sore. So, I joined in (despite my injuries), meaning I ended up running around after a ball in agony, my ankle constantly trying to give out on me, just trying to fit in.

Except, it still felt like I was on the sidelines, nobody passed the ball to me, nobody picked me anything but last for teams. When you’re seven years old who wants to play on the same team with the kid who rarely participates, can barely run and can’t throw a ball very well?

The next memories of feeling like I’m on the sidelines came in year 4. In NSW (Australia) this is the year you learn cursive writing and get granted your ‘pen licence’ if your writing is neat enough. Every other kid got a pen licence; I got to watch while everybody was presented with their ‘licence’, week in and week out. I never got one; my writing was too messy.

We still didn’t know that there was a reason my handwriting wasn’t neat and my hands would ache so bad when writing. I guess I’m an illegal pen user now (when I can use a pen and not a laptop that is).

When I got to high school I’d hoped things would be different, that I wouldn’t feel like I was on the outside looking in; but I did. Nothing was different. If anything the older I get, the more I feel like an outsider to my peers.

It feels like the more independence they get, the more I lose.

As I went through high school, social media really hit the world. The prevalence of social media platforms meant that every time I had to pass on going out with friends because I was injured, fatigued, sore, sick or something else (again), I would see photos, videos, messages, statuses, tags, check-ins, selfies and Snapchats of all the fun I was missing.

This also highlighted the inevitable times they went out without even inviting me, all because I had to say no so often.

Then there are the days of school that I was experiencing from a distance and via social media again because I was not well enough to go. “You’re lucky you’re not at school,” they would tell me, as they laughed, and joked and hung out together. They were having normal teen lives while I laid at home in bed, or if it was a ‘better sick day’ maybe on the couch, mindlessly watching the same movie or TV show over and over, not keeping track of the plot, too sick, sore and tired to concentrate. Bored. Very bored, but not well enough to do anything to entertain myself.

Or the days when I could go to school and I would be on the sidelines in P.E. again or be sat outside in the hallway catching up on a missed essay or exam. I would hear about all the fun my friends had had without me, again, or see it through the doorway, from the side of the basketball court or on Snapchat, Facebook, or Instagram, sometimes even via text.

In 10th Grade, I missed just shy of two entire terms, stuck on the couch or in bed. After a rehabilitation program, I was able to return for the last week of school for the year. And my last week at that school. I was back there hanging out with my friends, even my “best friend”. Yet being there in that moment, I felt more like an outsider than when I wasn’t there.

Throughout the year, friends and peers had been turning 16, and getting their Ls (Learner Drivers Permit). I’d been told I was not allowed to get my licence when I turned 16 as I would randomly lose feeling and control of my legs: not safe for driving (not to mention the fainting factor).

When my 16th birthday came around, I was in hospital. No big sixteenth birthday party for me, just a few friends out for dinner on hospital gate pass, too sore to enjoy myself. One had forgotten that it was on until I mentioned it earlier that day. That day I learned the less time you spend at school the easier it is for them to forget you.

Things looked promising when I started at a new school, I was doing better. However, I started the first day in a cast because of a dislocated wrist. Immediately I stood out as different. It got to the point I was considering saying “yes, it’s broken,” to avoid explaining it was dislocated because of a connective tissue disorder they hadn’t heard of (and that the injury was in fact caused by stuffing a teddy bear I had sewn! Yeah, embarrassing). I was pleasantly surprised, though, few people judged.

However the cast and then brace didn’t just mean I stood out as different, it meant that particular components of my design and technology course, like operating rather sharp dangerous woodworking machinery was out of my reach. I couldn’t do most of it, so I got to watch while the teacher did most of my project for me.

Things went downhill, and I was on the outside again. I was back to seeing school through social media, while I wasn’t well enough to get out of bed or out of the house, or had to leave early for appointments. It finally got to the point where I had to withdraw from school because I couldn’t get there.

I wasn’t well enough to travel on a ‘standing room only’ bus in peak hour for forty minutes; I couldn’t even walk across a room! I felt that TAFE the next year would be a better option than repeating year 11 via distance education. TAFE wasn’t a better option, the campus was inaccessible and overall it was a disaster. It was heartbreaking. I thought that was the worst it could get.

I adjusted my social media, so I’d see less of the fun I was missing at school and things improved for a while.

Then came graduations. While I realise it was a choice to withdraw and I could have continued school, I still wouldn’t have been graduating with my grade, which is what I found hard. I saw their graduation and formal online: photos, statuses, videos, Snapchats, tags in posts from relatives and all. It was everywhere. All day. For weeks, that was all I’d see on social media; it was overwhelming as I felt like such an outsider.

More than all the other times I’d felt like an outsider, this time I felt like an alien in comparison to my former peers. It was more upsetting that I’d been anticipating.

Unlike a lot of the other times through school where I’d felt like an outsider, this time I had one thing I didn’t then: support. Other people who understood what it was like, as they felt the same. This was invaluable; it was so helpful and most importantly validating. Sometimes just being listened to and truly understood by others who get what it’s like to live with hypermobility, helps more than you could ever imagine.

I have learned through all of this, that there is a unique “positive” that comes along with sitting on the sidelines of life on a regular basis: you become more observant, noticing everything. Observing the positives and the negatives; being aware of and grateful for what you have in life. Living life on the sidelines helps you to appreciate and make the most of every opportunity you have.

My name is Jessica, I’m 18 and from Sydney. I have hypermobile EDS amongst other things and enjoy dying my hair different colours of the rainbow, photography, graphic design, writing and reading, even if I have to do these things a little differently to those without hypermobility. 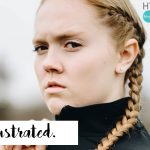 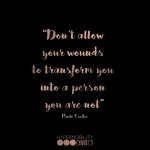